The Rod Is a Keeper, Even if the Fish Got Away Steve Licata’s best-laid plans didn’t quite work out with the first rod he built for the Project Healing Waters Fly Fishing National Rod Building Competition. He hopes his second attempt is more successful.

Licata, a participant in the Greater Kansas City Program, built a 9-foot, 8-weight rod as his first entry in the rod building competition in 2017.

“I built an 8-weight for the sole purpose of taking it steelhead fishing,” he says. “We went to the Pere Marquette River in Michigan, and I hooked only one fish.”

Licata is one of those people who punctuates many of his sentences with a self-deprecating laugh. Deeply religious, he views life’s events as the unfolding of a plan that he may not fully understand. He frequently uses the phrase, “So be it,” which is the translation of the word “Amen” from the Latin, Greek and Hebrew languages.

“The first day, the water was so clear that when I stepped in, the fish that were on the other side of the river took off like a bat out of hell,” he says. “It was tough fishing, needless to say, but I did manage to hook one fish.

“Sure enough, I let that thing run with it, and he stopped. I thought I had lost it, so I started reeling in the slack and as soon as he felt that tug, he took off again. I couldn’t get my hand off the reel fast enough, and the knob banged my finger and he was gone, broke me off. He was on for two runs of just a few seconds. So be it.”

He wants to give steelhead fishing another shot, to be sure. Until then, the 8-weight will serve him well fishing for bass and carp around Kansas City.

Meanwhile, Licata is working on his next rod, a 10-foot, 3-weight that he plans to use for crappie and trout. He began working on the rod in January in preparation for the 2018 Project Healing Waters rod building contest, a competition sponsored by a generous grant from the Bob Woodruff Foundation, additional funding from the Disabled Veterans National Foundation, and support from The Hook & Hackle Company .

Licata served in the U.S. Army Corps of Engineers in 1970-71 as a Spec-4 Land Surveyor. He volunteered for duty in Vietnam, where he spent nearly a year in Vietnam with a Construction Battalion.

“I was number 11 in the lottery in ’69,” he says. “Twenty-six days later I went in the service (laughs). I was with the Army Corps of Engineers, volunteered for Vietnam, got blown up twice (laughs again) and walked out without a scar, thanks be to God.”

So hard luck on the stream doesn’t faze him a bit. He’s seen worse. Still, he has high hopes for his 10-foot, 3-weight.

The purpose of the Rod Building program and Competition is to expand the therapeutic experience for PHWFF disabled veteran participants by giving them the experience of building their own fly rods to further their physical and mental rehabilitation through the sport of fly fishing.  The rod building program also has a fun competition component which gives participants the chance to win prizes for their rod building abilities.  Thanks to a generous grant from the Bob Woodruff Foundation, additional funding from the Disabled Veterans National Foundation, and support from The Hook & Hackle Company we’re bringing this great activity to even more programs and participants in 2018.  The 2018 Rod Building Program and Competition began on January 8, 2018 and will end on April 13, 2018. 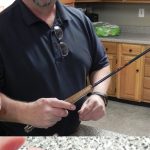 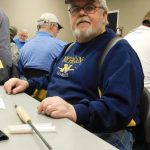