We’re honored to share a very special story from our Spokane, WA Program.  Harold Watters, a disabled veteran participant and volunteer, has made it his mission to pay it forward by tying campaign ribbon flies, specifically the Purple Heart fly, for those who have been wounded in their service to our Nation.

The Purple Heart Fly was designed and created by John Gort of the Olympic Peninsula Fly Fishers and the original fly is a part of the Project Healing Waters Campaign Ribbon Fly Plate.  John recruited and trained tiers from the 90-member club to design and create the plate, and each fly, to compliment a military campaign theme. Sixteen one-of-a-kind flies were designed, tied and mounted with the companion Campaign Ribbon. Because each fly is an original design using many hard-to-find materials, the project took hundreds of man-hours and nearly a year to complete.  This incredible tribute and work of art now resides at the American Museum of Fly Fishing in Manchester, VT.

Sylvia Bach, Rocky Mountain Northwest Regional Coordinator, Project Healing Waters Fly Fishing, Inc. notes: “I am proud to share this on behalf of Harold Watters! Harold is a participant/volunteer in the Spokane program. Here is his story…”

I’ve been a participant of Project Healing Waters Fly Fishing for 8 years. My first involvement was when I was in the Seattle VA Hospital. When I returned to Spokane, I joined because I found that tying flies would temporally take me out of my head and I had to focus on tying.

To give back or pay it forward, I started tying campaign ribbon flies, as I had seen a poster that the group located on the Washington coast where they tied a fly for each campaign ribbon. But they also had a Purple Heart fly… I tracked down the man responsible for it and ask if I could buy one. I was told they don’t sell them but if I was awarded the Purple Heart they would send me one. About a year later my tying skills were better and asked if I could tie them and give them to veterans.

I was sent the instructions and showed them what I could do and was given the go ahead to tie. Last year the Spokane Purple Heart Association asked if I could tie a few that they could use for their convention. I said sure, then they said “we need 400”. I worked on them thru the holidays and delivered them in late January.

I kept tying, and I have just tied my 1000th Purple Heart fly.

I have also modified the fly to give to Gold Star families, as my feeling is that their son, daughter, husband or wife gave their all for their country. Of the 1000, 100 are Gold Star flies.

To me, it is my way to give back to the program and share my tying with others that have been wounded for their country. 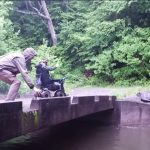 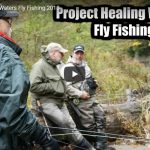