PHWFF Colorado Springs Gets Into Some Fish

The Colorado Springs Program of PHWFF headed out to the private ranch of Rainbow Falls Mountain Trout near Woodland Park, Colorado for a day of smiles, laughs, and of course, lots of fish.

PHWFF Volunteer Ken Willard, and participants Aimee and Scott Miller met volunteer outing lead Jim Mann at the gate of the ranch around 10 AM on Sunday, May 30 for a gorgeous day of fly fishing.

They immediately went to work and got their lines in the water after a quick rundown from Mann about the location.

“They had just stocked (the pond) with Golden Trout so you could see them swimming everywhere,” Willard said.

Ken headed down the bank toward the bridge with Aimee, while Jim stayed with Scott. The fish were rising a little bit but Jim explained that it was kind of a slow time of the day so they decided to move on down from the pond to some moving water.

Aimee and Ken had just got down to the water when Scott hooked up little further downstream, a nice rainbow.

Aimee’s first cast into the pool brought her a rise from a nice brown trout, but he was a little bit quicker than she was. The next fish Aimee hooked into was a nice, plump golden trout. The grin on her face was described as “priceless” as it was her first golden trout.

The day only got better from there. Throughout the course of the day, everyone caught around 20-25 beautiful fish a piece. Aimee ended up catching more fish than Scott, but he was a good sport about it. They all went home tired with some great memories and friendships.

“It was sure great to see smiles again,” Willard said. One of his most memorable moments was watching Aimee and Scott catch their first golden trout as well as their first splake trout.

Most of the fish were caught on either an egg pattern or a red chironomid with a white tungsten bead. Willard would like to thank Jim Mann for taking them out, as well as participants Aimee and Scott Miller. “I had just as much fun as you guys did!” 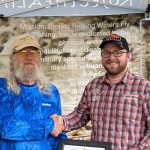 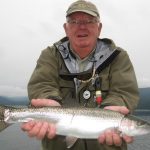