The first celebration was for Bob Crawshaw, Deputy Regional Coordinator, former Program Lead, Volunteer Instructor, and all around great guy. Bob accepted the Phil Johnson Exceptional Leader Award this year that was presented to him by Ray Babineau, Virginia Regional Coordinator. Phil Johnson was also in attendance and had several kind things to say about Bob’s tremendous service to PHWFF. Never one to hog the limelight, Bob had a surprise of his own that evening. He presented the Roanoke and New River Valley’s Program Lead, Jake Blizzard with a new award that has been created in his honor: The Blizzard’s Fancy Service Award. The commissioning certificate for this award said, among other things:

“This fly pattern service award was commissioned to commemorate the splendid service of Jake Blizzard to the Roanoke and New River Valley Programs of Project Healing Waters Fly Fishing. It recognizes the inspiration, enthusiasm, and energy he applies to finding and helping disabled veterans and their families.

…this fly is unique. There is not another one like it in the world. And never will be. It is an original, like Jake Blizzard.

…In the future, this Blizzard’s Fancy Service Award will be presented to individual Participants or Volunteers who best exemplify Jake’s qualities.” During his presentation, Bob spent a few moments recalling how when Jake took the program over there were only two Participants and four Volunteers.  Now, three years later there’s seventy-eight Participants and fifty-five Volunteers, of whom eighteen are trained guides. Acting Program Lead Kathy Mueller arranged the entire event including food and refreshments along with a celebratory carrot cake for desert.  There were forty-four in attendance including Jake’s surgeon who saved his arm and his family, grandchildren and all. Indeed, it was a celebratory evening to recognize two very dedicated, deserving men. 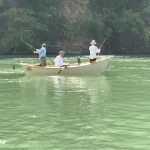 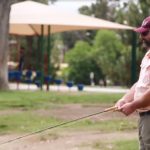