It was a very hot day, but before everyone arrived at the campsite, we were blessed with high winds that cooled down the temperature making it a pleasant weekend.

As everyone arrived, they were excited to be so close to the riverbank.  A few steps and they were in the water of which no one hesitated to do so.  A few minutes setting up camp and a few hours fishing before dinner.

The chow bell rang and the smell of burgers on the grill handily cooked by Charlie Trawick made everyone come running.  Most of our group attending were new participants and volunteers, so introductions were made.  Starting with our host Darren Delin, Arrowhead/Riverbend Boys Ranch, who allowed us to camp on the private property by the Duck River.  It was such a perfect spot; shade trees covered the whole area.

We wanted to show Darren our appreciation by making a small donation to the Boys Ranch.  Wayne Cook participant had noticed on our last outing to Arrowhead/Riverbend, that the US Flag needed to be replaced.  He had ordered one from Washington, DC and he presented it to Darren.  Thank you, Wayne, for being so thoughtful and considerate.

Also, joining us were the national Director Federal Markets Jeff Granberry and Daren Holaday, Market Executive, both for Eisai. They were excited to be able to meet with participants and volunteers since they are our new corporate sponsors.  Thank you for donating delicious food for our weekend.  They certainly fed us well.  These guys were such fun to be around, joined right in.

Marilyn Rogan broke them in on what a volunteer’s responsibilities are by having them prepare breakfast for the group at 6AM the next morning.  It was fun to watch these guys in action.  They did a great job of OJT.  Lunches were packed and Saturday was a full day of fishing.  The participants fished from 7AM to 7PM.  A few breaks in between, for water and lunch, but that was it.  When you are catching fish, you don’t want to stop, and everyone was catching fish.

Saturday night dinner was served, and fish stories exchanged.  Our special guest was a Viet Nam Veteran (Jim Short) that has been in the Murfreesboro program for many years.  PHWFF had sent him to Michigan to the bamboo rod building workshop.  He proudly told about the bamboo rod that he built. He also shared in third person some highlights of his military career in the US Secret Army during Viet Nam.  He has written a novelette about his experience of being captured during his tour.  His book is Flying by Dawn by Jamie Lew Shore (his pen name).  We were so privileged to have him join us along with his sweet wife Rita. He is such a special person, he has always helped his fellow veterans learn how to cast, tie flies and in general encouragement.  Even though his health prevents him from being able to fish and tie flies, he certainly helps any other way he can. Thanks, Jim, for all you have done for our program.

After our program, it was still day light, and everyone hit the water again to fish.  All up and down the river they were pulling fish out of the water.  Two of our new participants Shannon Littler and Ronald Woody caught fish on their first outing.  They will have memories of this trip forever.  Both were so excited to get waders and fly rods, they said they had to catch a fish.

Pleasant dreams came around nine o’clock as all were tuckered out from a long day of fishing.  The full moon was shining bright, and the local train was clacking down the track while visions of trout danced in everyone’s dreams.

Sunday morning arrived, breakfast served and fishing for half a day before heading home.  What a great weekend for fathers doing what they love.  Many thanks to our new corporate sponsors and volunteers for making memories we will never forget. 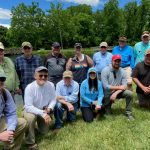 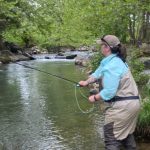