The 5th Annual Fly Tying Contest began on January 2 and concluded on September 15, 2017. During this time period, dozens of amazing flies were submitted by veteran participants from across the country. Each fly was judged by a fly-tying panel comprised of PHWFF volunteers, celebrity fly tiers and professionals. Out of the many incredible flies entered, a total of 5 finalists were selected. Each of the finalists are invited to attend the International Fly Tying Symposium at the  Marriott Hotel in Lancaster, PA November 11-12.  Sergeant First Class Trent Myer received Honorable Mention in the 5th Annual Fly Tying Competition.  Click here to read about it

Trent is the third generation to serve in the military. His grandfather served in the Army during WWI and his father served in the Navy as a Corpsman from 1953 to 1979. He enlisted in the Army as a Field Artillerymen and served 22 years and 18 days and attended numerous military schools and earned a few awards throughout his career. His deployments include two in Iraq and one in Afghanistan.  During his career Trent was able to earn his Bachelor degree. After retirement, he has been able to start his second career in healthcare and is currently working on his Masters in Healthcare Administration.

When he was stationed at Fort Belvoir, VA is when Trent contacted the local PHWFF program which at the time was led by Mike Cherwek. He started volunteering the following week with the program helping where he could, tying, casting, and rod building. In 2009, Trent received orders for Fort Drum where he continued to volunteer with PHWFF. During his last deployment, he was asked to teach fly tying on his FOB in conjunction with the resiliency program. He had classes on Sundays after lunch.  He dubbed this program “PHWFF Ft Drum forward”. Once he returned to Fort Drum he served as the Program Lead until his retirement in 2015. Trent is still active with the Fort Drum Program volunteering and assisting when needed.

Trent has seen PHWFF do amazing things not only for the Veteran but for their families. He has had numerous spouses thank him for what PHWFF has done for their husbands as well as families. For this reason alone, Trent will always be a supporter of PHWFF.

Trent married his best friend Tracy, they meet in 8th grade. In September of 1994 they were married. Together now 23 years he and Tracy have 5 children, one 20-year-old son and four 17-year-olds (three girls and one son). Trent and his family live near Ft Drum, NY 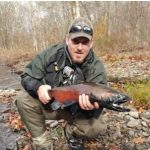