The 5th Annual Fly Tying Contest began on January 2 and concluded on September 15, 2017. During this time period, dozens of amazing flies were submitted by veteran participants from across the country. Each fly was judged by a fly-tying panel comprised of PHWFF volunteers, celebrity fly tiers and professionals. Out of the many incredible flies entered, a total of 5 finalists were selected. Each of the finalists are invited to attend the International Fly Tying Symposium at the  Marriott Hotel in Lancaster, PA November 11-12.  SGT Joe Jackson took 2nd Place in the 5th Annual Fly Tying Competition.  Click here to read about it

Joe was born in Salem, Indiana in June of 1984. He grew up in a small rural community in the mid-west to divorced parents. His mother introduced him to the outdoors at a young age. When he was with her she always had them fishing, camping or out walking in the woods. He caught his first fish at 4 years old just like most from he mid-west a small blue-gill under a red and white bobber. At seven years old he fell in love with the largemouth bass. The year was 1991 his mother had taken him and his two younger siblings camping at a small state recreation lake. He caught his first bass on a chartreuse and pepper flakes curly tail grub using a cheap old spinning rod. At that moment fishing sank it’s hooks into him. That same year his father, a Sgt. In the army had sent him to a two week military summer camp. Where he learned the basics of map reading, navigation, camo/concealment and Marksmanship. After that summer all he could think about was bass fishing and the U.S Army.

He joined the Army in December of 2001 as an Infantryman, he attended basic training at Ft. Benning the Army’s home of the Infantry. This is where he sustained his first of a few head injuries he would have over his career. After a training accident he missed three days of training two weeks before graduation. After nearly being recycled, his Sr. Drill instructor allowed him to rejoin his class and he graduated with his class in may 2002.

In 2004 his unit was deployed to Afghanistan is support of operation enduring freedom. Where he did dismounted patrols in downtown Kabul and surrounding areas, before being sent to a forward operating base in Herat, Afghanistan. Where he did mounted and dismounted patrols in the city and surrounding mountains on the edge of Pakistan. After returning home safely, he was redeployed to Iraq three years later. His unit operated out of Al Asad, Iraq as mounted security for civilian truck drives and QRF. He sustained a head injury at the end of the deployment which left him with amnesia for four days. After twenty-seven days at a hospital in camo Anaconda in Baghdad he was released to his unit back at Al Asad Air Base. He however was not allowed to go outside the airbase and spent the last month of his deployment watching his team on the BTF in the unit command center while they ran missions.

Upon returning State side, he went to warrior leader’s course, was promoted to Sgt. and graduated from Small Arms Master Gunner School.

After another head injury, he was honorably discharged from the army under medical conditions.

Since leaving the military in July of 2014, he got a job at a factory in Seymour Indiana, where he quickly was promoted to team leader. After a five months of being a team leader he was laid off. He turned to binge drinking and made an attempt to take his life at the end of 2014. It was reported to the VA hospital and they pushed him into counseling.

After that he moved to Indianapolis, Indiana, where he could not find work for two years. The first six months in Indianapolis he joined the GoFishIN project as a crew captain volunteer teaching children the basics of fishing.

In late 2015 at the VA hospital in Indianapolis he saw a flyer taped to the wall of an elevator about project healing waters fly fishing. Which rekindled an old passion…..fly fishing.

This couldn’t have happened at a better time in his life. At that point he was unemployed for six months, and the unemployment had left him in a severe bout of depression, anxiety and feelings of Ineptitude from living off the income of his then girlfriend now wife Meagan. If it wasn’t for Meagan and PHWFF Indy he wouldn’t be here. PHW gave him a place to be with other who may know what he’s dealing with, so he dug out an old peak vice he had purchased years ago and attended his first phw tying class. He found solace behind his vice an ability to focus he hadn’t had since leaving the military. His preference in tying is deer hair, because the amount of focus it takes to turn a patch of hair into a bass bug takes his mind off the world and that passion he developed for big ol bucket mouths as a child.

He currently works for the Conrad Indy a Hilton international property as an engineer. His free time is spent with his wife Meagan, his daughter Adalyn (4) and his three stepsons Maliki (10) Rylan (9) and Kurt (7), fly fishing or hunting wild mushrooms. Just like when he was in the military he is training his young ones for what lies ahead except this time they are carrying a fly rod or a bobbin 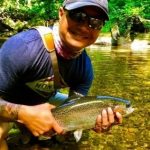