We are pleased to announce that Bob Fitch has been named Chairman Emeritus of Project Healing Waters Fly Fishing, Inc (PHWFF). Although signifying Fitch’s retirement from active participation on the Board of Trustees, his leadership will continue to inspire thousands of volunteers and supporters through our mission and the deep, caring connections it fosters.

Fitch’s contributions to PHWFF programs, and the disabled veterans they serve, cannot be overstated.  We will forever be grateful for his leadership and, thanks to his many contributions, we can continue providing our unique form of therapy to an ever expanding number of disabled active duty military service personnel and disabled veterans in-need of it. As Chairman Emeritus, Fitch will continue his passionate dedication to the advancement of the PHWFF Cause and his commitment to healing those who serve.

In addition to his tenure on the PHWFF Board of Trustees, his inspiring leadership as Chairman, and as a member of the PHWFF Century Club, Bob Fitch was further recognized in 2013 with The Patriot Award – the organizations highest and most prestigious award for his tireless and extraordinary service to Project Healing Waters Fly Fishing Inc. and to those wounded, ill, and injured active duty servicemen and servicewomen and disabled veterans whom this organization gratefully serves.

Fitch was first introduced to Project Healing Waters Fly Fishing (PHWFF) by Lt. Gen Michael Barbero, U.S. Army (ret) – a connection that led him to host the first of many outings for PHWFF participants in 2007 at his property on Mossy Creek. During this inaugural outing, Fitch was inspired by the program and a powerful conversation he had with CPT Eivind Forseth, U.S. Army (ret). This led him to further dedicate himself to the PHWFF Cause. What followed was the creation of The Mossy Creek Invitational – one of PHWFFs premier fundraising events that serves as a fun fly fishing competition with PHWFF veteran participants enjoying a memorable day on Virginia’s Mossy Creek alongside a sponsor and professional fly fishing guide. Since it’s inception in 2008, the Mossy Creek Invitational has raised over $2 million for the organization and provided disabled veterans with the support they need on their journeys to physical and emotional recovery.

As Chairman Emeritus, Fitch will continue his passionate dedication to the advancement of the PHWFF Cause and our commitment to healing those who serve.

Bob Fitch has over 45 years of experience that include military service, Capitol Hill and the defense and aerospace industry. In all facets of his career he has been recognized as a dedicated professional and has built an outstanding reputation throughout customer, policy maker, legislative and regulatory communities in the United States and abroad. His contributions to the mergers and acquisition growth of BAE Systems have been countless as the company navigated through the regulatory maize that resulted in a “US company” status — recognized by customers and competitors.

Early in his career Mr. Fitch served in the US Army with tours in Germany, Vietnam and the Pentagon. He commanded the first coed company in the Army and was promoted ahead of contemporaries to the rank of major.

After three years of employment with E-Systems in Dallas, Texas Mr. Fitch was asked in 1984 to return to Washington and join the staff of the House Permanent Select Committee on Intelligence. Over the next five years he conducted oversight of intelligence programs and budgets with focus on intelligence, surveillance and reconnaissance support of the US military.  In 1989 he assumed the position of Staff Director for the Program and Budget Subcommittee and was responsible for the oversight of all US intelligence programs and activities. He has traveled to over 50 countries and has engaged with Ambassadors, Embassy Staff, country leaders and industry partners. In late 1992 he served on the Presidential Transition Team.

In 1993 Mr. Fitch departed Capitol Hill and re-entered the defense industry representing GDE Systems as its Senior Vice President for Government Relations and Strategic Development. For the next  18 years he was directly involved in acquisitions by Tracor, Marconi and the merger of British Aerospace and Marconi Electronics Systems in 2000. As the Senior Vice President for Government Relations he supported BAE Systems’ strategic development and the regulatory approvals of over 24 acquisitions that were approved by the Committee on Foreign Investment in the US (CFIUS) and other regulatory bodies.

Mr. Fitch served on the Special Security Agreement (SSA) US Board for BAE Systems Inc. as a non-executive director and was Chairman of its Risk Committee.  He also chairs the Government Security Committee for the SSA Board of HAECO/TIMCO . He has participated on panels as an industry expert in the CFIUS process and SSA implementation and was a contributor to the deliberations that affect current laws and regulations that govern today’s foreign investment in the US.

In following with his mentor’s philosophy that one’s life consists of three phases – learning, earning and returning, Mr. Fitch has served on several boards to include the George C. Marshall Foundation (Vice Chair); Ford’s Theater Society (Treasurer and Executive Committee); the USO Foundation (Chairman) and the USO Global Board; the National Cryptologic Museum Foundation (Founding Member); and Project Healing Waters Fly Fishing (Chairman). He is a trustee of Marymount University and previously served on the Virginia Federation of Independent Colleges Board where he judged its annual Ethics Bowl.

Mr. Fitch resides in Arlington, Virginia with his wife Roberta. 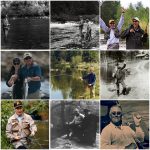 American Presidents on FishingAnnouncements, In The News, Regional 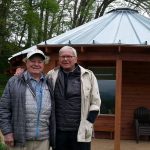