Each year our Regions recognize a veteran participant who has caught the PHWFF vision and made it their own.  We are pleased to announce that Jason Hendricks has been recognized as the 2016 Participant of the Year in the Pennsylvania Region.

Jason began his association with PHWFF as an inpatient at the CVAMC program in September of 2014.  He transferred to the West Bradford, PA program upon his discharge from CVAMC.  Throughout his participation, he consistently assisted other veteran participants at West Bradford with fly tying, giving instruction and support, and also with rod building. In late 2015, Jason relocated to Bedford County, PA.  Even with his relocation he continued to join our meetings as his care was still delivered at CVAMC.  During 2016, Jason completed a rod started by a fellow participant whose disabilities did not allow him to complete it.   Jason took it upon himself to interpret the design that his fellow participant wanted to see on the rod and incorporate that in the finished product.

On numerous occasions, Jason would bring material that he dyed to the program and even requested meeting time to show how to dye material. In mid 2016, his records were transferred to the Altoona VAMC.  Having established himself in Bedford, Jason was asking for advice on how to start a local PHWFF community program.  He constantly talked with fellow veterans and engaged Ft Bedford TU.  We finally got him connected with our Altoona PL, Dave Thomas at the annual PA Region Steelhead Slam event.  Even with his relocation Jason would still make occasional visits to our meetings and he participated in our local overnight trip to the Douglaston Salmon Run.

At this point, we see Jason and Dave working together to deliver the message and benefits of PHWFF to deserving veterans.  He was for us and will continue to be a great asset to Project Healing Waters with his knowledge of rod building, fly tying, materials and his various fishing skills which include, trout, bass, steelhead, salmon, and even salt water.  However, most important is his unselfish attitude of sharing his knowledge with both his fellow veterans and volunteers. Jason Hendricks being presented with the “2016 Participant of the Year Award” for the PA Region. Pictured are Jason Hendricks, Skip Hughes, Lefty Kreh, and Tom Herr 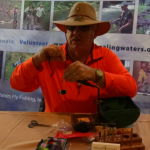 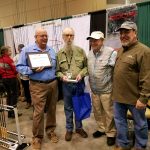