Each year our Regions recognize a veteran participant who has caught the PHWFF vision and made it their own.  We are pleased to announce that Mitch Dziduch has been recognized as the 2016 Participant of the Year in the Rocky Mountain South Region.

Mitch is an active Veteran Participant/Volunteer who joined PHWFF in April 2014. Since joining PHWFF, Mitch has completed Fly Tying 101, 201, 301, 401 and was part of the 2015 Rod Building Class. In fact, Mitch did so well at fly tying he is now a Mentor for the 2016 fly tying program.  Mitch has participated in trips throughout 2014-15 and began volunteering in March 2015. Mitch started as the Graphics Coordinator and has progressed to Assistant Participants and Volunteers Lead/Trip Coordinator for the Colorado Springs Program.  He was instrumental in updating our trip flyers and provides power point aid and expertise for meetings and presentations. Mitch has volunteered on trips as an Assistant Trip Lead in 2015 and will progress to Trip Lead in 2016. Mitch speaks highly and often about our Colorado Springs program at various venues to include the Special Forces Association, 10th Special Forces Group at Ft. Carson, VFW, PPFF and any other activities where disabled veterans are there to be reached by the PHWFF message. He is willing and able to inform people of how much of a difference PHWFF can make in their lives, and uses his own story as an example, making him a valuable asset to CS PHWFF.

Mitch served in the US Army as a paratrooper and an Operational Detachment Alpha team member of the 10th Special Forces Group (Airborne); he retired after 20 Years of Service.

After leaving the military, Mitch continued his education and is a graduate of Colorado Technical University with a Bachelor of Science degree in Computer Engineering. He continues his involvement with the USA/SF as a contract civilian instructor at Ft. Carson, CO. Mitch spends his spare time pursuing various recreational activities to include skiing, snowmobiling, bowling, hiking, martial arts and fishing. He is the proud father of 2 children and the extremely proud grandfather of 1 granddaughter.

Mitch has expounded on his involvement in PHWFF in these words: “A friend of mine, Frank Ortega, got me involved in Project Healing Waters (PHW) last year and I must say, fly fishing and its related activities have become more than just a hobby, they have become a part of who I am.  In addition, I have volunteered my time to this program in hopes of making it better for the Veterans who gave so much in defense of this wonderful land we live and fish in. “ 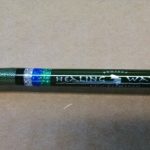 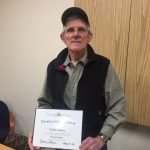