Program Lead Bob Gartner, of PHWFF Fort Belvoir, recounts The 7th Annual Fly Fest at Harman’s Cabins near Petersburg, West Virginia.  This great annual event brought together eight-four veterans and volunteers for a memorable weekend along the banks of the North Fork of the South Branch of the Potomac River.  Additional photos of The 7th Annual Fly Fest can be viewed on Facebook by visiting Project Healing Waters – Quantico or Project Healing Waters – Fort Belvoir

This year’s 7th Annual Fly Fest included 84 Veterans and Volunteers who traveled to Harman’s Cabins near Petersburg, West Virginia, from as far away as Guatemala, for a weekend of fun, fishing, great food and camaraderie. This annual season ending trip, nicknamed “Fly Fest”, sponsored by the Quantico & Fort Belvoir Project Healing Waters Fly Fishing Programs, occurs each year the weekend after Thanksgiving. This is the largest PHWFF Program overnight trip in the country. This year there were 36 wounded/disabled service members from all the military branches. Of that number, 15 veterans were making their first trip to Harman’s. Each of the veterans had 1 of the 36 volunteer guides to assist them on the water. Among the volunteer guides were 7 Veteran participants who’ve transitioned from program warrior to Volunteer. There were 12 other support volunteers throughout the weekend to prepare meals and help manage the large group. Veterans and Volunteers flew in from Guatemala, South Carolina, Massachusetts, Utah, and drove from Georgia, New York, and North Carolina. We could not partake in such a large event without the support of our dedicated Volunteers. People arrived throughout the day on Friday which was like a homecoming and family reunion for Veterans who haven’t seen each other since last year’s Fly Fest. Some Vets went fishing Friday afternoon then everyone gathered that evening at the nearby Ruritan Community Center for dinner.

Before dinner, Veterans and Volunteer guides were paired-up to dine together and get to know one another before going out on the water on Saturday. We then commenced with our annual equipment giveaway where all new Fly Fest Veterans were provided a donated rod and reel. The other Veterans received equipment donated throughout the year to our PHWFF Programs. These donated items included sling packs, wader bags, fly tying desks and even a new Go-Pro.

In addition, everyone attending received a Yeti Tumbler with the PHWFF logo on it from Dr. Mike Cherwek who raised money from donations in Fredericksburg and worked with vendors to purchase the tumblers. Mike is the original Fort Belvoir Program Lead who, unfortunately due to a knee injury, was unable to attend this year’s Fly Fest.

The large Friday night dinner consisted of steak and shrimp prepared by Calvin Riggleman and his crew of four helpers. Calvin, aka Bigg Rigg, is Marine Veteran of Operation Iraqi Freedom and has been catering our group since 2011. The community center has been a critical asset for the event and the $250 cost is worth every cent. By using this center, with an industrial kitchen, Bigg Rigg is able to prepare food efficiently and we are able to eat together as a full group rather than in shifts in the largest cabin as we used to do. Calvin and his crew prepared 6 meals beginning with dinner on Friday night and ending with lunch on Sunday.

Our host and owner of Harman’s Cabins, Todd Harman, joined us for dinner on Friday night and donated more than 30 Harman’s Cabins hooded sweatshirts for attendees. Todd was part of the event until late Saturday morning when he drove home to Gainesville, Virginia.

As in previous years, after dinner on Saturday, fly tying demonstrations were held in two large cabins and new Veterans, Volunteers and Guides sat-in on learning new techniques, flies and just talking about the day’s events.

“This is the most fun time ever. I’ve learned so much and had a great time.”  – Fort Belvoir participant In the past, we have endured torrential rains and 14 inches of snow, so we can only hope for decent weather. This year was the best weather yet with temperatures in the 50s and sun. The water level was lower than ideal but there were fish and soon everyone was hooking rainbow trout and a few brown trout, some up to five pounds. For many Veterans, this was their first time fly fishing for trout and the photos and happy faces told the story. For one young Marine, a rainbow trout was the very first fish he has ever caught. “Seriously the best trip I have had in a long time. Was much needed. You guys showed me that comradery still is very much alive.” Quantico participant

In addition to fishing, PHWFF National employee and Quantico Volunteer, Julie Keene, provided massages and acupuncture treatment all day Saturday. Julie is trained and licensed as a massage therapist and acupuncturist and the Veterans signed up for appointments during the weekend.

Saturday lunch was chili cooked over a fire and sandwich wraps served outside near Cabin 13 along the river.

During lunch, we were joined by a Volunteer from the Petersburg Inter-Faith Food Pantry. This is the 4th year Fly Fest attendees have donated to this charity. Everyone attending Fly Fest was asked to bring a donation for this local food pantry. Even Veterans who couldn’t attend sent a food donation. Each year we have increased the amount of food donated and have contributed more than 4,000 pounds since “Fly Fest Gives Back” began. This year we expect to be over three tons total!

Just before Saturday’s dinner at the community center, we hosted our Volunteer Appreciation, recognizing Volunteers in the Fort Belvoir and Quantico Programs for all the hours they devote to PHWFF and all they do to make both programs successful. Two and Five Year Service Pins and Certificates were awarded. PHWFF President and CEO Todd DeGrosseilliers joined us and awarded 10 Year Service Pins to Clem Danish, Mark Pierce, Harold Harsh, Eivind Forseth, and Marty Laksbergs.

Sunday was the end of a wonderful weekend as people fished for a while and drifted home, exchanging hugs and contact information.

“I can’t thank you guys enough for welcoming [my wife] and I into the program and letting us have these experiences they are truly the best experiences we have ever had.” Quantico participant

Special thanks to: Todd Harman for his generosity and constant support of the Quantico and Fort Belvoir PHWFF Programs; Calvin Riggleman for feeding the appreciative crowd every year – All Calvin does is ask “How many?”- and Marty Laksbergs, Quantico Program Lead, for all the planning and logistics in making this trip happen every year.

Ed Nicholson, the founder of PHWFF, once said that we don’t just teach fly fishing, we build relationships. Upon leaving on Sunday, one veteran commented…

“…the fishing is fun but the relationships with other Veterans and Volunteers are what keep us coming back.” 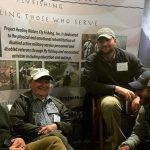 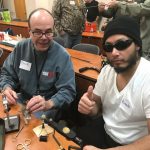