The Board of Trustees of Project Healing Waters Fly Fishing (PHWFF) takes great pleasure in presenting the project’s most prestigious award, the Patriot Award, to John Miko. John’s tireless commitment to PHWFF, over ten years, has been demonstrated in many unparalleled ways and has furthered the rehabilitation and healing of countless disabled men and women who have served in the military, past and present. His dedication to PHWFF, and involvement with the men and women we serve, is an inspiration to all.

After retiring from the Coast Guard, and while working at BAE Systems, Inc., he first became involved with PHWFF, as a member of the Board of Trustees, and assumed the responsibility of Tournament Director and was charged with  organizing and running the first Mossy Creek Invitational (MCI), held in Bridgewater, VA, in 2008. Now, 10 years later, the MCI stands as a major fundraiser for PHWFF, but, more importantly, a signature PHWFF event that brings the healing power of community, volunteers, and the disabled veteran participants together for a glorious day in June, each year, on  Mossy Creek. John’s service as the Director of the MCI has been the pre-eminent and absolutely critical element in its overwhelming success. Aside from the intangible benefits for all the participants, volunteers, and donors, the MCI, to date, under John’s sterling leadership, has generated over $1.4 million dollars – the most successful fundraising event for PHWFF.

As the Director of the MCI John begins the process of organizing the event months in advance. His attention to detail from the ordering of awards, ensuring volunteers are identified and prepared to the final pairing of PHWFF participants with donors make the MCI a wonderful experience for all. His wife Lauren has designed Buffs and shirts and has been a key contributor to the flawless planning and execution of the MCI.

John has continued to mentor many participants in the Asheville, North Carolina area and remains committed to PHWFF activities to include participating in the first training conference for the organization. His compassion for others has been seen in his selfless efforts to assist many in need of a helping hand.

John Miko epitomizes all that is exceptional and good in PHWFF Volunteerism. His long-term dedication and support and his total commitment to the disabled men and women PHWFF serves go well beyond that which could reasonably be expected from a volunteer. As such, his work within PHWFF is in keeping with the highest standards of the Patriot Award.

The Trustees of PHWFF are very proud to recognize him for his tremendous accomplishments as a true Patriot. 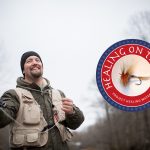 Start your bidding! The Healing on the Fly – NYC Silent Auction is now live!Announcements, Regional 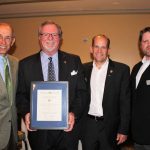