‘Dispatches from Atz’ is an on-going series chronicling the writings of Atz Kilcher during his time at Freedom Ranch for Heroes with the veterans of Project Healing Waters.

That’s what it was. Short and simple, a gift exchange.

We were sitting at the table waiting for the van driver to take us to the airport in Bozeman. I told the vets that I was going to write a short piece called the gift exchange. The conversation started because somebody asked me where I had gotten my shirt. It’s a beautiful light blue color, the material is really nice. But no clue what kind of material, but you can tell it’s a well-made shirt. So I told the guy that asked me, that several other people had asked about my shirt. So I told him how I got it. I’d complemented Jim on his shirt, not only did it have the Project Healing Waters logo on it, but it also had his name. He told me that he had the name put on himself. I told him how much I liked it. After a few minutes there was a knock on the door to my bedroom, and Griego handed me a beautiful blue shirt with the Project Healing Waters logo on it. Right after I  showered. I put it on.

Another guy gave me a hat, in fact he gave me two identical hats so I can have one for work and one for nice. That was Richard.

But the gift exchange I am talking about really has nothing to do with anything physical. Yes, I could say I gave these Veterans songs and stories and poetry, and they gave me hats and shirts. But that’s missing the mark.

And it isn’t just in the giving and receiving, but it’s the spirit in which it is done. You give of your stories, of your experiences, of your healing journey, with a humble heart. Not to brag or boast. Not to impress somebody with what you have been through. You give your gift knowing that it will help you as a giver, and that it will help those receiving it.

When you are receiving the gift, you don’t do so with only half a heart, or only half listening – just pretending you were interested. Nope! You receive that other Veterans gift with the arms of your heart and mind wide open…like an excited kid at  Christmas, not knowing for sure what it is inside that beautiful wrapped present but you are giddy with anticipation.

Sitting there at the breakfast table I said something like, “I gave a story, someone gave me a story, I gave a song, someone gave me tears, I gave of my  experience, someone gave me a shirt, or a hat. And then sometimes you get an unexpected gift. I was saying goodbye to Richard, the guy who gave me the two hats. I had to run upstairs to get my iPhone for a last-minute photo. As I ran by another veteran, who likes to wear those muscleman T-shirts, before I knew what was going on, the 18-year-old inside of me dropped and I did a quick push-up in front of him. I ran upstairs to get my phone and then I went back out to talk to Richard and his wife. I  turned to the muscleman dude and said,“Before shoulder surgery last year I used to be able to clap in-between push-ups but I can’t anymore.” That’s when Richard said, “I’m damn near 80 and I can still do push-ups you want to see.” He started to get  down and then he said, “I can’t get down because my back hurts.” I thought it was just a joke. But then he went ahead. He slowly reached for the ground with his hands and then knelt down and then took the push-up position. And damned if he didn’t  pump out 25 push-ups! Inconceivable!

That was a gift. A gift of inspiration. A gift of motivation for me to keep doing my push-ups. Sitting there at the table earlier with these vets one of the guys said, “That’s what Therapy is: a gift exchange.”  Bingo!

Another unexpected gift. That has to be the most beautiful definition I had ever heard.  But I maintain it’s a special type of therapy. Nothing of the kind you get at the VA. Not the kind you get from going to see most shrinks. But the kind you get from your tribe members. Folks who have walked  down your trail in your shoes. Folks that don’t think they know more than you or know better than you. But simply folks who are willing to give and receive, with no preconceived notions of outcome. Maybe I will start a new therapy called the gift exchange therapy! But I have a hunch it started long ago.  Back when the warriors of old returned to the village. Those who returned had given the gift of protecting their lands and their tribe. Those who did not return had given the gift of their life. The village in-turn, gave gifts. Gift of celebration and dance, gifts of the hero’s welcome home, gifts of cleansing and healing ceremonies, gifts of honoring those returning warriors and hearing their stories. Those were the days of the real gift exchange. That’s what I think that veteran was trying to say at the breakfast table that morning. That’s what therapy is: a gift exchange. 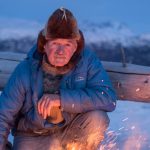